On January 28, 1951, the Santa Fe added a single dome car to each of its Super Chief trains for a total of six. Built by Pullman, the domes had flat panes of glass and were mid-way in height between the B&O and Wabash domes.

Despite the flat-paned windows, these cars may have been the most luxurious style dome cars ever built. A large lounge with seats for about 20 graced the long end of the car, while a smaller lounge with seats for ten was located under the dome along with a small bar to serve drinks. The short end of the car was the famous Turquoise Room, a private dining room for up to 12 people. The car was always located next to the train’s diner so waiters could easily serve people in this room.

The dome itself was unique among short domes in having only 16 instead of 24 seats. Eight of the chairs swiveled around, parlor-car style, in the center of the dome; the other eight were the standard side-by-side seats at either end of the dome. 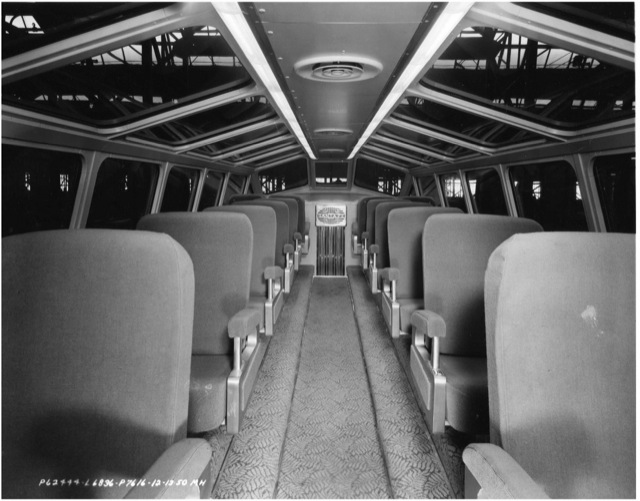 The dome itself had reasonably sized windows and eight swivel chairs, as shown here, plus four double-seats, two sets of which are shown in the background of this photo. Click image for a larger view.

Of course, this meant that only a tiny share of Super Chief riders would be able to enjoy the dome. The all-Pullman train’s standard consist after the dome was added had beds for up to 146 passengers, meaning up to 130 would be disappointed if they wanted to be in the dome. Perhaps the Santa Fe suspected that most riders of the “train of the stars” preferred the privacy of their rooms.

Beautifully completed and a must for any Santa Fe modeler. Get this rare piece today before it's gone.