Skip to content
SHOP US 24/7 AS USUAL, COVID SAFE

The Southern Pacific claimed that most dome cars were too tall to fit through its tunnels. So it designed and built its own dome cars out of older cars it had on hand. Its first car was built from a 1938 Coast Daylight observation car using a dome lattice and windows purchased from the Budd Company. The car started work on the San Joaquin Daylight on June 24, 1954.

At 15-feet, 2-inches tall, these were the shortest domes built: an inch shorter than the Pullman-built domes and eight inches shorter than most Budd short domes. This can be seen from the small forward- and rear-facing windows of the SP domes.

One stairway led straight to a door to the next car, while the other went down into a 20-seat lounge that still had the dome overhead, giving a cathedral-like feeling. The end of the car–the part without a dome–held a small kitchen for serving drinks and snacks to passengers.

The first dome (#3600) only also had a crew-dorm at the rear end. The car was also a little shorter (81 feet vs. 85 feet) than the other SP domes. The car had ten panels of dome windows, while the later domes had twelve. 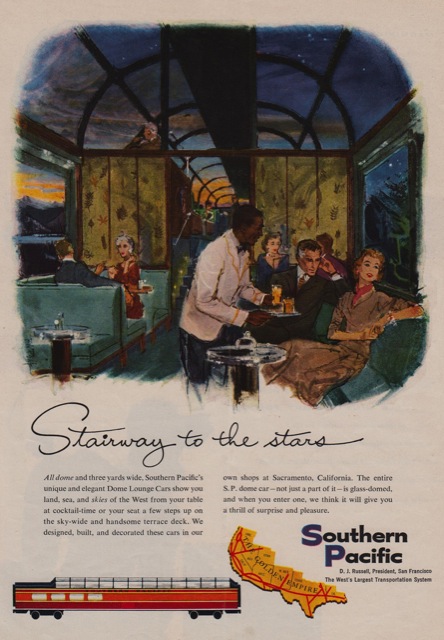 Beside the San Joaquin Daylight, SP’s domes saw service on the Shasta Daylight and, later, the Coast Daylight. Amtrak ran the cars with the kitchen at the rear, but photographic evidence indicates that the SP at least initially ran them with the kitchen in the front.

The Coach Yard 3/4 dome lounge has been custom finished in our LSC Custom Shop with attention to details to duplicate the first prototype built by Southern Pacific. Our car is painted in the iconic SP Daylight colors to represent the "San Joaquin Daylight" in the mid-1950 through the 1960s. Our brass model is complete with interior and tinted dome "glass" and window treatments. A Soundtraxx SoundCar (operator's manual included) has been added to the car and hidden under the main dome seating area. The modeler may enjoy (in DCC) natural sounds coming from the car while in consist. Includes 20+ passengers enjoying their travel while onboard this glorious-looking car.